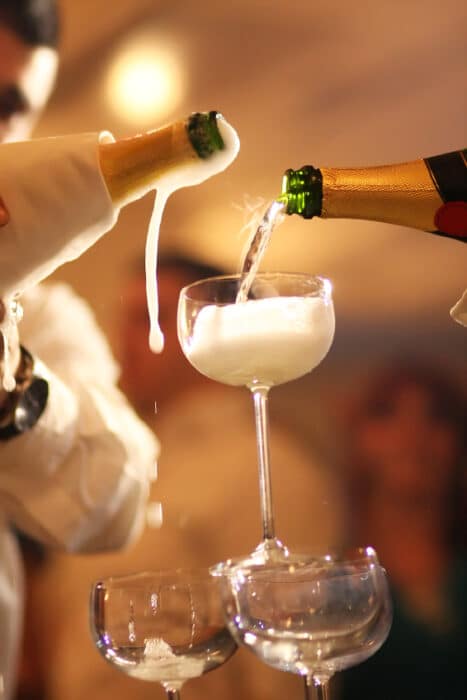 Shamus was attending his favorite charity’s gala dinner. He always enjoyed the event and had been attending for years. As Shamus’ life had improved, and his father’s guiding principle that ‘Charity begins at home’ was satisfied, he carefully researched which charities he wanted to support. Tonight’s event was being held at one of the city’s boutique hotels that excelled at serving up great food and fantastic wines. The hotel had tastefully decorated the hall in a 1920s theme; complete with gambling tables, flappers, and a magnificent champagne fountain.

Shamus and his guest were to be seated with Elizabeth and her guest. Was it coincidence? Or was it Shamus’ seating change request? Elizabeth sat next to Shamus, separated only by a table corner. She looked radiant, her black dress highlighted her long legs and accentuated her slim figure; Elizabeth had made sure Shamus would notice her this evening.

When Elizabeth spoke, her eyes twinkled with excitement, and Shamus was mesmerized by her charms. During their dinner conversation, Shamus subtlety moved his napkin off the table and gently placed his hand on Elizabeth’s knee. He was unsure what her reaction would be. From above the table, in their mirrored reflection, no one else was aware of what was happening. Just before Shamus removed his hand, Elizabeth responded by smiling at him and gently squeezing his hand.

Wild thoughts raced through his mind. What was happening to him? Just before desert was served, Elizabeth excused herself from the table. After about 15 minutes or so, Shamus also went for a walk … As luck would have it, when he walked out into the hotel lobby, Elizabeth was just returning to the event. She smiled at him, and again he felt himself being caught up in the moment.

As Shamus walked toward her, she paused in mid-stride and then slowly backed herself up against the wall. She looked excited, her eyes sparkled. Shamus gallantly asked, ‘May I kiss you?’ to which Elizabeth nodded in agreement. He kissed her passionately, and she returned it with enthusiasm. After seemingly endless moments they stepped away from each other and returned to the event, pretending that nothing had happened.

Back at the table, when the police station explosion arose in their discussion, Shamus related ‘The Emergency‘ story. Apparently, the police investigation had determined the bomb was actually intended for another Droch warehouse and not for him. The most accepted motive at this time was that some fanatical protesters had targeted Droch Enterprises due to its exploitive business practices. Shamus asked ‘Is every business endeavor worth the risk if it requires sacrificing your principles?’ Elizabeth asked nervously ‘I hope you’re not still investigating Droch’ … to which only silence followed.

As the event wound-up, Shamus and Elizabeth said goodbye. You could tell they did not want to part ways. They thought no one had noticed their romantic kiss, yet with both of them being business leaders they naturally drew attention from everyone.

Share this article:
Previous article:‹ Episode 4: The Emergency
Next article:HST Kills Businesses. Save Yours Now! ›